Tell the Senate: Pass a COVID package not SCOTUS!

Judge Barrett is an extremely extremist pick! She's on record as a risk to our healthcare, voting rights, reproductive rights, civil rights, environment, and LGBTQ+ rights! Rushing her nomination through the U.S. Senate is unprecedented and a sham.

***Join us in taking 2 very important actions this week to send a strong message to the U.S. Senate that we expect them to listen to the American people and not ram through an extremist Supreme Court pick just weeks before the election.

ACTION #1: SIGN OUR LETTER calling on the U.S. Senate to focus on the real crisis facing our families: COVID-19, not filling a vacant Supreme Court seat. 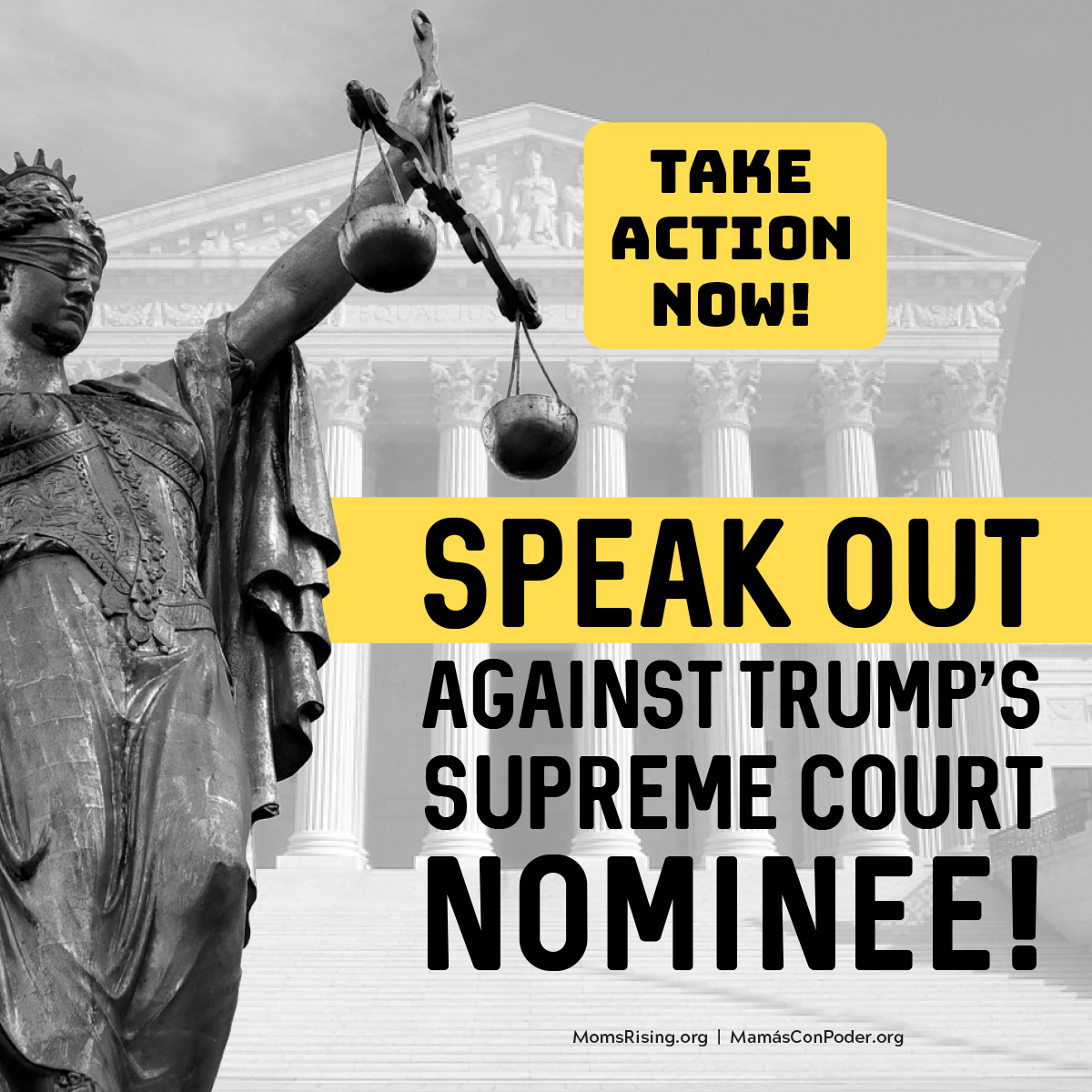 ACTION #2: CALL YOUR U.S. SENATORS NOW! Text SCOTUS to 747464 and tell your Senators "no Supreme Court votes until after the inauguration". (Msg and data rates may apply) 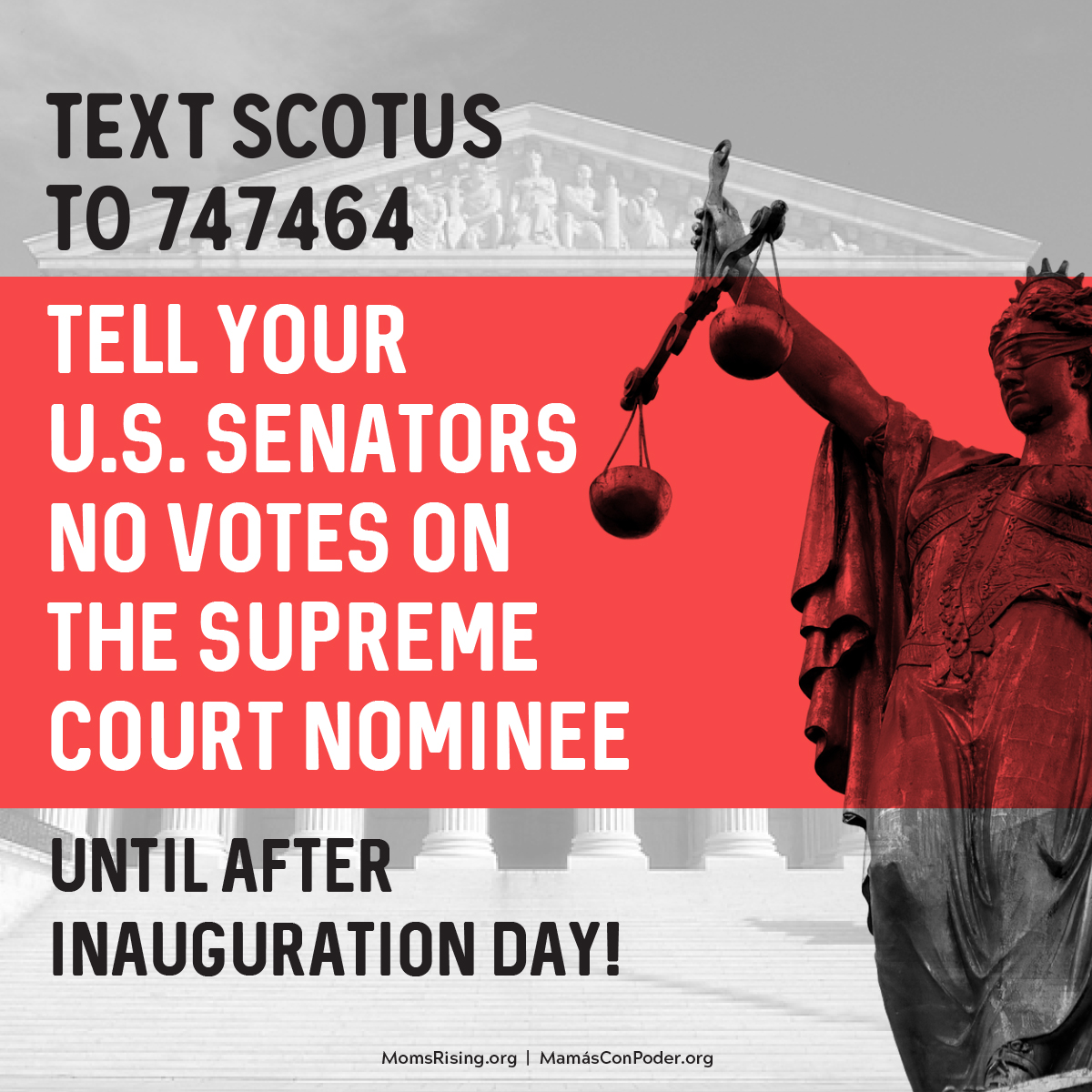 Judge Barrett went before the U.S. Senate Judiciary Committee last week and was questioned for two days. Coming out of those hearings, one thing is very clear: Judge Barrett is just as extreme as we thought she would be based on her past writings and rulings and is a major threat to our families' healthcare and rights. It's unsettling how close he is to getting what he wants with Amy Coney Barrett!

Our rights are at risk. Our health care. Our access to voting. Our education. Our reproductive rights. Our economic security. Our housing. Our disability rights. Our ability to live freely and fully. We need our Court to recognize and protect the rights of all of us.

This is what is at stake with rushing through an extremist Supreme Court nominee just weeks before the election.  Lives are at stake. Instead of putting our healthcare at risk, the U.S. Senate must prioritize passing legislation to address the devastating effects of this pandemic — not rushing through a nominee who would take health care access away from us. Under no circumstances should the Senate be considering a new Supreme Court justice until after Inauguration Day.

From purposely using the term "sexual preference" to demean and discredit the LGBTQ+ community [1] to failing to answer questions on the legality of the Affordable Care Act [2],  Amy Coney Barrett is NOT a justice who would protect and defend our families. By nominating Amy Coney Barrett to the Supreme Court, President Trump continues to put Americans' health care at risk – a catastrophic move under any circumstances but made even more so because he's doing it during a deadly pandemic that has killed over 215,000 Americans. Make no mistake: Republicans have tried for years to repeal the health law but they still have no plan to replace it – so instead, they're rushing through Judge Barrett to strike down the law in just a few weeks.

Republican U.S. Senate Majority Leader Mitch McConnell is trying to ram Barrett's confirmation through the U.S. Senate in the next few weeks, despite the fact that voting has already started in many states, more than 17 million people have already voted in the election, and a Supreme Court justice hasn't been confirmed this close to an election since 1864! [3] The real emergency here is the fact that millions of people are still out of work because of COVID-19, frontline workers don't have the protection they need, and families are struggling financially while facing evictions, lack of childcare, and inability to pay their bills.

It's critical that YOU speak out and use your voice now!

***Here are the 2 high impact ways you can take action again:

We need a justice who won't pick and choose whose rights to defend, but one who will work to protect equal justice for all.

The clock is ticking. The time for the U.S. Senate to take action is NOW! We are planning on delivering your signatures at the end of this week and we have already heard from Senate offices that it makes a big impact to make phone calls, so we need to make sure we have as many people speaking out as possible. After you sign our letter and make your phone call, please forward this email to your friends and family and post our action link to Facebook, Twitter, and Instagram. You can also RT our call in line on Twitter.

Thank you so much for everything you are doing during such a chaotic and stressful time.

P.S. Quick question for you? How would President Trump's Supreme Court nominee, Amy Coney Barrett, impact you and your family if she were seated on the court? We want to hear your stories, so we can share them with U.S. Senators ASAP to help protect the Supreme Court from an extremist nominee. (You can share your story anonymously too!).

[2] "Amy Coney Barrett can evade questions but can't evade her record on ACA and Roe." People for the American Way, october 15, 2020.