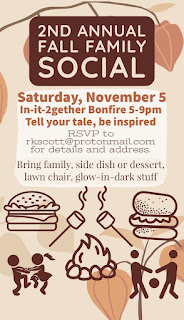 Fellow Tea Party Patriots:
Thank you to everyone who attended this past month's meeting.  Below you will find some highlights from this past meeting, and notes about upcoming events.
Upcoming Events:
05 November: We Hold Rights will be having an evening Bonfire and BBQ from 5-9PM.  Please see attached flyer for the RSVP information.
08 November (Tuesday):  Election Day!  Make sure to go out and vote legally.  If you or any other citizens need assistance in getting to the polls, Karen Lanacelli can place you in contact with individuals who will be able to provide transportation.
Additionally, the Republican party has asked if there are volunteers to man the table at any of the 5 polling stations in our county.  if you are interested, the available timeslots are 6-11AM, 11AM-3PM, 3-7PM.  Please reach out to Karen for additional information.
Tea Party Meetings November and December:
Because of the Holiday Schedule with Thanksgiving and Christmas, we are expecting to have a social gathering each month in lieu of our standard meetings.  Details will be forth coming, so be on the lookout for additional information, but it will likely be closer to the middle of the month than our current meeting times.
Meeting Highlights:
We Hold Rights had a brief discussion of their continuing efforts to secure expanding medical rights for all citizens.  Please see attached for an article that appeared in the Northern Neck Sentinel, which includes a history of the vaccine mandates related to federal employment and the impact on those who have not shared an affirmative vaccination status with their employer, regardless of the reasons provided or exemptions requested.
Efforts to stir potential voter interest in the county include individuals door knocking on behalf of candidates, to the tune of larger than 1000 homes.  That's quite a feat for our rural county and is an effort to be proud of!
For those who may not be aware, there have been updates to polling locations in our county.  Of particular note is the update for the Dahlgren District to the UMW Campus, behind Walmart.  Please check out the county website to confirm your voting location.  https://www.kinggeorgecountyva.gov/283/Polling-Locations
As a reminder to all citizens, the King George Board of Supervisors holds public meetings the 1st and 3rd Tuesday of every month, at 6:30PM.  An informed public is necessary to hold our county officials accountable for their actions and decisions.
A memorable statement from the evening:
A conservative county such as ours deserves conservative representation
As always, we look forward to seeing you at our next meeting and we appreciate all of your efforts.
Sincerely,
The King George Tea Party

Diane, we have no excuse for complacency

With less than two weeks until Election Day -- I can't say enough how much is at stake. With our democracy on the line, we have no excuse for complacency this election. Make sure you are registered to vote and plan how you will vote in this election.

Affordable healthcare? Climate change? Gun safety? All of these issues are on the ballot this fall. We can't be the generation to let our democracy fall. You can take action today by donating $15, $30, or a few bucks to support All On The Line's work to protect our democracy.

The organizing team is working tirelessly with our partners, Power the Polls, to safeguard election integrity by ensuring polling places across the nation are fully staffed. I'm sure you've heard that far-right election deniers and conservative extremists are stopping at nothing to obstruct our democratic processes, from enacting voter suppression laws to intimidating election officials. How can you claim to love this country but actively undermine the very bedrock of our democracy?

If you're thinking about the answer and unsure how this is possible -- you're not alone. Over the years, we've mobilized across the country, fighting for fair maps, holding elected officials accountable, and advocating for people to have the opportunity to have their voices heard at the ballot box.

A few weeks away from Election Day and All On The Line needs your support to continue work, like organizing volunteers to safeguard our elections. You can take action by donating today to keep our democracy alive.

Our democracy may be on life support, but I believe that together, our work can revive it -- not just for a better tomorrow but also for future generations.


Thank you for all your support,
Ted Corcoran

All On The Line is the grassroots advocacy campaign supported by the National Redistricting Action Fund. Support our work to end gerrymandering. 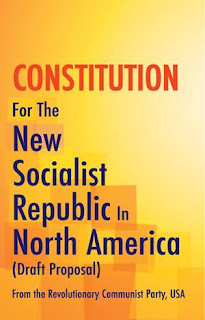 Governor DeSantis has gained considerable support for being a future  resident of the White House, and rightly so.

He has a good record for supporting the Constitution in the best interests of the citizens of Florida.

However,  he needs information about a constitutional convention (Con-Con) also called an Article V Convention.

Many good constitutionalists, including Governor DeSantis,  have been taken in for a Con-Con as being
a good solution to the federal government's overreach, however, a Con-Con  is  just the opposite.
It is the means of replacing our Constitution which protects our God-given rights  and freedoms
with a soviet style constitution.  One such has already been written, waiting in the wings to be passed at a Con-Con.
( See the attachments:  Constitution for the New  Socialist Republic in North America by the Communist Party USA.)

For a  good rebuttal to a Con-Con see the attachments,  BROWN'S BULET POINTS and HULDA BEST .

The proper solution to government overreach is to abide by the Constitution we have now.
Since it is not our Constitution that is at fault, changing it not the solution.

Please contact  Governor De Santis with reasons to oppose a Con-Con and urge him not to support a Con-Con.
His contact information is :

suemlong2@gmail.com
for The Committee for Constitutional Government

Sign our thank you note to Congress on health care & climate!

President Biden just signed the Inflation Reduction Act into law. Join us to say thank you!

President Biden just signed the Inflation Reduction Act of 2022 into law delivering real change on health care, climate, and tax policy and it's all thanks to YOU!

We also want to thank the lawmakers that made this possible—the Democrats in Congress since not a single Republican voted for this bill {eyeroll}.

***Sign our thank you note to President Biden and the members of Congress who made all of this possible by voting for this bill!!

The Inflation Reduction Act will deliver real change for our families, environment, and economy. Here's what made it into the final bill:

The bill passed both the Senate and the House of Representatives on a strict party line vote–not a single Republican voted to deliver this type of change for our families, environment and economy. But we do want to thank the leaders that did!—> SIGN our thank you note to President Biden and the members of Congress who voted for this bill!

So how did we get here? Because of YOU! From July 2021 - July 2022, our members took over 407,000 actions on health care and taxes, made thousands of calls to Congress, and shared hundreds of personal stories in support of advancing these issues. Your voice, you signing onto letters online, your stories made a BIG difference – and added up.

And we're not done yet!! While this is a giant, massive moment, we also recognize  our work together still continues until we have national policies – like fair pay, paid family/medical leave, maternal health equity, monthly Child Tax Credit checks, and childcare – that truly support our children and families. We are so grateful for the hundreds of thousands of actions our MomsRising members have taken to push this Congress to make big, monumental change—and we will keep fighting for families together, including for affordable childcare, maternal health, home- and community-based services, the monthly Child Tax Credit checks, and paid family and medical leave, as well as closing the Medicaid gap and protecting immigrant families, who are critical to our care infrastructure and communities.

We want to say thank you to our elected leaders for passing these policies today–and, importantly, also thank you to YOU for never, ever giving up and knowing that when you use your voice you can create real change.

With you in this fight!