Did you hear about the President's promises to Black Americans?

Fellow Members of the King George TEA Party:
We will hold our monthly KGTP meeting THIS Thursday 1 October at 7:00 PM at the American Legion Post #89 on Dahlgren Road.  I look forward to seeing everyone there.  Yes, we will try to close the meeting at 8:00 so that everyone can go home to watch the Trump-Biden debate which starts at 9:00 that evening.
The King George Republican Committee will meet just prior to our meeting (starting at 6:00) and they will host Sheriff Chris Giles.  I don't know if he has a specific topic to cover but I expect that some of the discussion will cover the ANTIFA / BLM protests here in Virginia and what that might mean for our county.  Bring your questions to the meeting!
A couple of months ago one of our KGTP members determined that there was sufficient interest in organizing a militia here in the county.  The intent would be to support and defend the Constitution of the United States, the Constitution of Virginia, and to support local law enforcement.  Beyond that, several folks have taken steps to put together some of the founding documents that would support such an organization in accordance with Virginia Code.  In light of the chronic rioting in several cities across the US, in light of the violence and destruction that accompanied those riots, in light of the fact that some of those violent riots occurred in nearby Richmond, and for concern that future violent rioting may impact King George county this may be a very prudent initiative. Please come to this Thursday's meeting and we will discuss the formation of a King George militia and how that would benefit us all.
Last week I sent out an announcement regarding the Trump rally in Northumberland County on Saturday.  Like most Trump events, that one was hugely successful and had 2,000 people attend.  Wow, what a great turnout despite the rain!!!  Many thanks to Kat for putting that on.
As noted in the VERY extensive Elections / Vote Integrity section below… there is a tremendous amount of interest in election fraud this time.  Some of these issues hit close to home as I received an e-mail from someone that passed on to me information that was rather disturbing.  Without including the entire e-mail, here are some snippets:

"My 17 year old got this in the mail today Sept 24th 2020.  It appears to solicit voter registration to a minor."
"This mailing is just ripe for unintentional voter fraud. Again this was an unsolicited piece of mail. Pictures attached."

If you have a similar experience, i.e., that someone in your family also received an election ballot even though they were under 18 years old… please let me know.
And now for some news….
TEA Party / Nationalism Movement
From the top article below:
"These laws and rules regarding various COVID protections are going to be a fact of life for a while. My problem with all of them is that they are all being forced upon us in the name of SCIENCE but the science seems to change almost weekly. There is a randomness to it all that makes it easier and easier to stick to my belief that most of the elected officials making up the rules are far more interested in imposing their wills than in actually saving any lives."

Regulation
From the top article below:
"The Wolf administration's pandemic policies have been overreaching, arbitrary and violated citizens' constitutional rights, Stickman wrote in his ruling.

National Debt / Its the Spending, Stupid!
From the top article below:
"'This is by far the highest level of debt recorded in American history,' said Rep. Steve Womack (R-Ark.), the ranking Republican on the House Budget Committee, in a statement. 'A burden of this magnitude increases the risk of a financial crisis brought on by Washington's failure to budget.'  CBO Director Phillip Swagel noted, however, that a fiscal crisis isn't immediately at hand while the Federal Reserve works to keep interest rates so low. The debt is still manageable and Congress has time to address it — although action may soon be needed with major Social Security, Medicare and highway trust funds set to dry up within the next 11 years, Swagel said."

Patriotism / America First
From the top article below:
"'I was just doing it to honor the people that lost their lives 19 years ago,' Brady Williams, a senior, told Local 12. Brady carried the Thin Blue Line flag onto the field. His father is a police officer, and Brady said he wanted to honor all the cops who lost their lives trying to save others on 9/11.  Another player, Jarad Bentley, whose father is a firefighter, carried the Thin Red Line flag. 'If it had been [my dad] killed on 9/11, I would have wanted someone to do it for him.'"

First Amendment / Freedom of Speech / Freedom of Religion
From the top article below:
"Education Secretary Betsy DeVos announced that a final rule "Improving Free Inquiry, Transparency, and Accountability at Colleges and Universities" will go into effect immediately. Any institution that fails to uphold the First Amendment will not receive any grants from the federal government. The rule will also protect student religious groups from discrimination."

Second Amendment / Right to Keep and Bear Arms
From the top article below:
"'Every decade or so, a legal matter arises that holds the power to negatively affect our lives for generations to come,' the video begins. 'Regardless of what side of the political spectrum you identify with, this is about you.'"

Fourth Amendment / Right to Privacy
From the top article below:
"Facebook Inc. is again being sued for allegedly spying on Instagram users, this time through the unauthorized use of their mobile phone cameras.  The lawsuit springs from media reports in July that the photo-sharing app appeared to be accessing iPhone cameras even when they weren't actively being used."

Abortion / Right to Life, Liberty, and the Pursuit of Happiness
From the top article below:
"She rebuked the notion of a 'living Constitution,' arguing that the judge's role is not to twist the text of the Constitution to fit his or her policy prescriptions but rather to interpret the law faithfully.  'If the judge is willing not to apply the law but to decide cases in a line, in accordance with personal preference rather than the law, then she's not actually functioning as a judge at all. She's functioning as a policymaker,' Barrett explained.  'And I would have had no interest in the job if the job was about policymaking and about making policy decisions,' the judge said. 'My interest is in contributing to our tradition of judges upholding the rule of law.'"

Corruption / Rule of Law
From the top article below:
"A long-awaited report released by Senate Republicans Wednesday makes a series of devastating new corruption allegations against Joe Biden's son, Hunter Biden, and alleges that the Obama White House knew Hunter's work for Ukrainian gas company Burisma Holdings prevented "the efficient execution of policy with respect to Ukraine" during Biden's tenure as vice president.  According to the Senate Homeland Security and Governmental Affairs Committee and Senate Finance Committee report, Hunter Biden had business associations with Chinese nationals linked to the Communist government and People's Liberation Army resulting in millions of dollars in questionable cash transactions. The Senate investigation also found links between Hunter Biden and human trafficking, the adult entertainment industry, and/or prostitution."

National Sovereignty / Border Security / Illegal Alien Invasion
From the top article below:
"Fairfax County, Virginia, has freed more than 900 criminal illegal aliens in less than two years, an investigation reveals.  From May 2018 to May 2020, Fairfax County — the wealthy suburb of Washington, D.C. — received 929 detainers from Immigration and Customs Enforcement (ICE) to turn arrested illegal aliens over to their custody so they would not be released back into the community.  An investigation by the Immigration Reform Law Insitute (IRLI) finds that the Fairfax County Sheriff's Office only honored 14 of the ICE detainers filed in that period — indicating they released 915 criminal illegal aliens into the community rather than hand them over to ICE agents."

Conservatism / Capitalism
From the top article below:
"'Critical race theory, the 1619 Project, and the crusade against American history is toxic propaganda — an ideological poison that, if not removed, will dissolve the civic bonds that tie us together,' Trump said. 'The only path to national unity is through our shared identity as Americans. That is why it is so urgent that we finally restore patriotic education to our schools.' <snip> "The Declaration of Independence and the Constitution are the greatest charters of freedom the world has ever known,' Pence said. 'Our Founders knew history, but sadly we live in a time when too many are forgetting history today.'"

Anarchy / Communism / Socialism / Creeping Socialism
From the top article below:
"The Democrats WANT the violence to continue. They WANT the violence to get even worse if the election doesn't go their way. They want Americans to believe that these riots are necessary and spontaneous because people are fed up. Except they aren't spontaneous.  Furthermore, data is now showing that not only have the protests been organized, 95% of them are linked to Black Lives Matter."

Information Denial / Censorship / Social Media Censorship
From the top article below:
"Black Lives Matter appears to have removed a portion of its website calling for the disruption of the 'Western-prescribed nuclear family structure requirement.'  The now-deleted 'What We Believe' page previously outlined some of the movement's key objectives including a call to disrupt the Western family unit. This morning, when users visited the site, the page was no longer available."

Deception / Propaganda / Social Engineering
From the top article below:
"A Smithsonian Institution museum graphic recently claimed that concepts like '[o]bjective, rational linear thinking,' '[h]ard work' being 'the key to success,' the 'nuclear family,' and belief in a single god are not values that unite Americans of all races but are instead 'aspects and assumptions of whiteness.' The museum also stated that '[f]acing your whiteness is hard and can result in feelings of guilt, sadness, confusion, defensiveness, or fear.'"

Attacks Against Conservatives
From the top article below:
"A California woman who was part of a Black Lives Matter "Caravan for Justice" group protesting the grand jury verdict in the Breonna Taylor death drove her car directly into a group of Trump supporters counterprotesting. Two people were injured and taken to the hospital.  The woman, Tatiana Turner, of Long Beach, Calif., driving a white sedan, appeared to calmly get in her car and deliberately drive into the pro-Trump crowd."

Elections / Vote Integrity
From the top article below:
"James O'Keefe, the founder and CEO of Project Veritas, said: 'Ballot harvesting is real and it has become a big business. Our investigation into this ballot harvesting ring demonstrates clearly how these unscrupulous operators exploit the elderly and immigrant communities—and have turned the sacred ballot box into a commodities trading desk.' O'Keefe said, 'We are showing Americans what is really going on in one of our great cities—but, it's not me saying—we have the operators on tape saying it all themselves.'"

Miscellaneous
From the top article below: 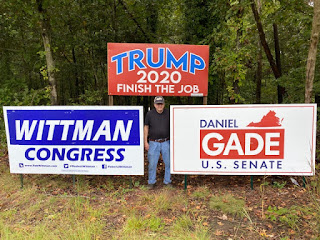