FWD: Quick Signature: Help our citizens on the islands!

Rob - your signature is still needed! 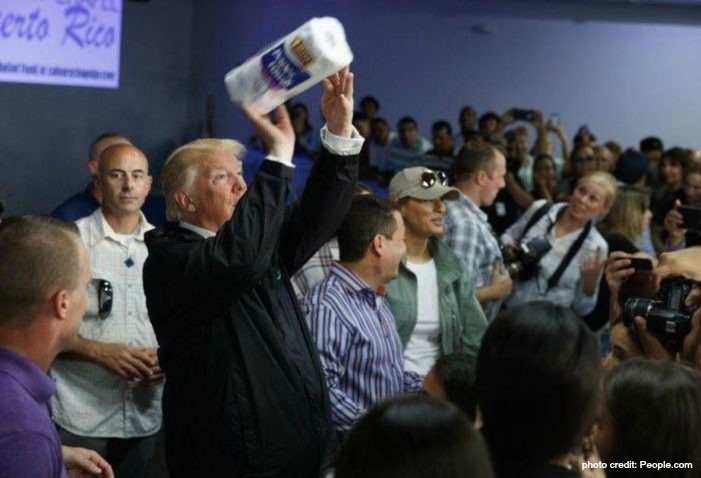 Unfortunately, we are going to need a lot more than that to clean up the island. The situation on-the-ground in Puerto Rico is dire. Puerto Rico has 3.4 milloon residents and is part of the United States of America. Our fellow citizens are in trouble. Power remains out for the majority of the island and basic necessities are in short supply. Moms and families in Puerto Rico and the U.S. Virgin islands need your help.

*Click here to tell Congress to pass emergency funding for Hurricane Maria victims in Puerto Rico and the U.S. Virgin Islands and grant a long term waiver of the Jones Act!

Thanks for all you do,

P.S. check out our new video! We explain why Republicans in Congress are looking to cut long-term disaster assistance in order to pay for tax cuts for wealthy corporation, millionaires and billionaires (seriously!!)

Read on for more details ...

143 hours. That’s how much time I spent without electricity after Hurricane Irma hit Central Florida. We had a generator and could run to the gas station whenever it needed gas, though. We also had cases and cases of water, food, and medicine. Communications were in and out and I could barely speak to loved ones to check in and make sure everyone was okay for the first 48 hours. It wasn’t easy, but I knew help was near if we needed it and that my child would not be lacking in basic human needs.

This is not the case for our fellow Americans who live in Puerto Rico and the U.S. Virgin Islands after Hurricane Maria, many of whom haven’t had power, food, clean water, or safe shelter since the hurricane; and it’s breaking our hearts. [1]

Our voices are needed to get them help. Now. Immediately. There’s no time to waste.

*Click here to tell Congress to pass emergency funding for Hurricane Maria victims in Puerto Rico and the U.S. Virgin Islands and grant a waiver of the Jones Act!

(A point of clarification as there’s been some debate on social media on the matter: Puerto Ricans are U.S. Citizens [1])

The current situation is dire. A week after Hurricane Maria, Americans are experiencing what has been described as a full-blown humanitarian crisis in Puerto Rico and the U.S. Virgin Islands. [2] Hurricane Maria made landfall less than 2 weeks after Hurricane Irma did, ripping through the center of Puerto Rico, taking out power for the entire island, water, roads, and other infrastructure, and has already claimed the lives of 16 people, with that number expected to rise. [3]

Assistance must come in many forms to Puerto Rico, not just by the emergency resources from FEMA. Unlike the U.S. Virgin Islands, Puerto Rico is not exempt from the Jones Act of 1920 which limits shipping between U.S. ports to U.S.-flagged vessels only. [4] President Trump has denied the request to grant a waiver of the Jones Act in order to ease the shipping of much needed resources and supplies to Puerto Rico. These waivers have been approved in the past as recent as during Hurricanes Harvey and Irma. [5] This denial bottlenecks resources not just from the mainland but from other countries that wish to provide assistance. This is beyond cruel!

As we watch Hurricane Maria victims struggling through floodwater to reach safety, fighting for their very survival, and going without power and shelter, we are heartbroken and searching for ways to help. Well, here’s one critical way: Make sure the Federal Emergency Management Agency (FEMA) is adequately funded so help gets to Puerto Rico and the U.S. Virgin Islands quickly. Help in the form of search and rescue crews, volunteers that can provide basic assistance, and medical care, experts who can help with damage assessment and provide shelter to those who have lost their homes, and experts who can provide assistance to the millions of people without electricity.

*Tell Congress now that FEMA must be given the emergency resources it will take to meet the unprecedented needs of Hurricane Maria victims and grant a waiver of the Jones Act for Puerto Rico.

The gulf region of our country was not prepared for Hurricane Harvey in Texas. And our U.S. citizens  certainly weren’t prepared for the devastation caused by Hurricane Maria in Puerto Rico and the U.S. Virgin Islands of St. Croix, St. John, and St. Thomas. After Hurricane Harvey, lawmakers appropriated $15.25 billion in relief funds but this was before Hurricanes Irma and Maria made landfall — that’s not nearly enough in resources to cover rescue and recovery efforts that are so needed at this time. [6]

A report by catastrophe-modeling firm AIR Worldwide estimates that Hurricane Maria's damage could lead to as much as $85 billion in losses, with most of that loss being in Puerto Rico. [7]

Anyone who has turned on the television in recent days knows this is an emergency situation and that the families in Puerto Rico and the U.S. Virgin Islands need a focused emergency response. A major infusion of federal funds is critically needed to bring in additional emergency response teams; begin cleanup efforts; repair the infrastructure of damaged hospitals, houses, schools, and businesses; provide aid to displaced families; help those who have lost their homes and livelihood; provide healthcare and nutrition assistance to those in need; and more. The Jones Act waiver should be enacted without delay!

But while federal funding for disaster relief should be increased immediately, it should not come at the expense of other programs that support our families’ health care, nutrition, housing, education, and welfare. Under current law, emergency funding is not included under existing budget caps, and Congress should follow the law to ensure an immediate and effective response without causing harm elsewhere.

The U.S. Congress is currently considering their federal budget. Republican leaders want to pass a federal budget aimed at reducing the size of government by slashing government programs. In his own version of the budget, President Trump proposed major funding cuts for disaster relief. [8] As we are seeing now with Hurricanes Harvey, Irma, and Maria, FEMA is central to relief efforts in these historic national disasters, demonstrating the unique role government plays in times of need, providing assistance and support, mitigating the effects of disaster for America families and communities.

Please forward this email to family, friends and anyone else you know who wants to help our fellow Americans in the path of Hurricane Maria. Please also share the action link on Facebook and Twitter.  The more of us who reach out to Congress, the faster we’ll have an impact.  Here’s that link again for you to share: http://action.momsrising.org/sign/hurricane-maria/?t=11&akid=9661%2E847037%2EusS_YE.

Together, we must be a strong voice to make sure the resources are available to help the families and communities in the path of this national disaster.

Like what we're doing? Donate: We're a bootstrap, low overhead, mom run organization. Your donations make the work of MomsRising.org possible--and we deeply appreciate your support. Every little bit counts. Donate today on our secure website.

Want info from MomsRising.org in Spanish? Sign up to receive emails from our Spanish-language community, MamásConPoder.org!

What should MomsRising tackle next? Tell us what's on your mind.