Fellow Members of the King George TEA Party:
.
As you will remember, our next meeting will be Thursday 6 February where we will have Daniel Gade as our guest speaker.  This will be a fantastic opportunity to meet him and ask your questions in his quest to unseat Mark Warner.  Here are some online sources you can use to prepare for this visit:

Last week I noticed that someone had -AGAIN- defaced one of our signs (see the picture below).  As you know, both of our signs quote President Trump's inauguration speech with the phrase, "From this moment on it will be America first."  Well, in the first defacement the vandals simply used a permanent marker to scratch out "America" and wrote underneath, "Russia."  Elementary school-level, if you ask me.  This time they were a little more creative in that not only did they go to the effort to match the sign's existing paint color but they creatively used that spray paint to convert "America" to "me."  Middle school-level this time.  Either way, my son and I were able to restore the sign to its original message.  It is, however, time to put up a new one.
Probably the most important news article included below would be the top one found in the Second Amendment section (titled, RICHMOND: THE MOTHER OF ALL BUFFALO JUMPS).  While it is written from a very "tactical" perspective, it is a good piece of analysis and does address several of the potential scenarios that could arise if people become really, really stupid during Lobby Day.  I know that much of what is written in this article is quite beyond the very peaceful protests that is characteristic of the TEA Party… but the author is quite right that this Lobby Day is a perfect opportunity for nefarious agitators (ANTIFA being one of them) to incite violence.  If you go to Lobby Day, do not get caught up in it.
TEA Party / Nationalism Movement
From the top article below:

"The real problem with nationalism, the kind that President Trump campaigned on, is that it offers true and therefore intolerable normality in a clown world. It is normal to want to stay out of foreign wars, to preserve your religion, language, people, and culture."

This is exactly right… that what was normal "back in the day" is now labeled with some kind of "…ist" moniker used to categorize, isolate, and humiliate anyone adhering to "the old" morals.  At some point the pendulum will swing back but the damage done to American culture will be indelible.

Regulation
From the top article below:

"The Trump administration is proposing to change the rules to speed up construction of big projects like pipelines and dams by streamlining the process. Green groups will wail about "gutting" the regulations but, in fact, it will re-establish a balance between the need for environmental protection and the need for intelligent use of the land."

A balance between the world "as is" versus the advancement of civilization must be achieved.  It is good to see that President Trump's deregulation efforts will begin to find favor in the future.

National Debt / Its the Spending, Stupid!
From the top article below:

"As part of the Iran nuclear deal, the U.S. government flew pallets of cash to the Tehran [Iran] airport.  This load of...bills was supposed to be a down payment on peace.  Didn't work out.  Shocker.  Those pallets groaned under the weight of $150 billion, likely unloaded from the plane by straining fork trucks.  How best to make that figure more concrete?  If you divide $150 billion by 330 million Americans, that works out to about $450.  Four hundred fifty dollars is my share of the payola."

That is $450 for every man, woman, and child in America… the burden on an individual taxpayer is even higher.   This is outrageous.

What did Iran do with your $450?
https://www.americanthinker.com/blog/2020/01/what_did_iran_do_with_your_450.html
Trump Goes There: 'The Missiles Fired Last Night at Us Were Paid For by the Funds Given to Iran by the Obama Administration' (VIDEO)
https://www.thegatewaypundit.com/2020/01/trump-goes-there-the-missiles-fired-last-night-at-us-were-paid-for-by-the-funds-given-to-iran-by-the-obama-administration-video/
Solyndra 2: Boondoggle Boogaloo
https://www.battleswarmblog.com/?p=43105
Another Expensive Solar Scheme Bites the Dust
https://www.americanthinker.com/articles/2020/01/another_expensive_solar_scheme_bites_the_dust.html

Economy
From the top article below:

"'The service providers posted the largest gain since April, driven mainly by professional and business services. Job creation was strong across companies of all sizes, led predominantly by midsized companies,' said Ahu Yildirmaz, vice president and co-head of the ADP Research Institute."

"What happened on January 7th 2015 was terrible. But our response to it made it more terrible, and emboldened civilization's enemies. With respect to the late Charb, the choice is not between dying standing up or living on our knees - for those who choose to live on their knees will die there, too, cringing and craven. As I said five years ago:  'The weepy passive candlelight vigils - the maudlin faux tears and the Smug Moral Preening overdose - aren't enough. If you don't want to put out the fire, it will burn your world to the ground.'"

This is also a call for we Conservatives to push back against against censoring our voices in the public square.  Being brave can mean just not shutting up.

Second Amendment / Right to Keep and Bear Arms
Regarding the top article below, the below is from an e-mail that a friend of mine sent to me:

"Got this from somebody on the 5th District committee.  <Snip> I'm pretty sure there will be 'agent provocateurs' within the throngs. I will be encouraging everyone to keep their wits about them and that 'concealed' means CONCEALED!  It would be a great idea to eschew the Confederate flags and camouflage, but that will fall on some deaf ears. The numbers is what should impress the other side, not threats of violence. Recommended reading."

Take a look at the picture in this article just above "Scenario 2."  As they say in safety training, "Don't be that guy."  If you plan on attending Lobby Day, dress like you would if you KNEW you were going to be on national media.  You just might be whether you recognize it or not.  Sure, there are probably going to be the agent provocateurs that stage such crowds for the camera… but let's not add to that mix.

Abortion / Right to Life, Liberty, and the Pursuit of Happiness
From the top article below:

"'Republicans today stood for the most vulnerable among us – the unborn,' House Leader Kevin McCarthy told the Daily Caller News Foundation. 'It is sickening that Democrats have used their majority to stand with their socialist base rather than with the most defenseless in our society.'"

And the Democrats accuse we Conservatives of being cold, callous, and uncaring for the vulnerable in our society.  You don't get more vulnerable than being a yet-to-be-born child.  And yet, the Democrats chose to not recognize their vulnerability.

Corruption / Rule of Law
From the top article below:

The logic these people use is… illogical.  Getting a college degree in order to practice law must not be as hard as getting a degree in, oh, I don't know… underwater basket weaving.

"'Breaking News: The Fifth Circuit Court of Appeals just reversed a lower court decision & gave us the go ahead to build one of the largest sections of the desperately needed Southern Border Wall, Four Billion Dollars. Entire Wall is under construction or getting ready to start!' the president wrote on Twitter."

And who is the Biggest Looser in all of this?  None other than Nancy Pelosi.  I remember well reading about this exchange on Twitter during last year's government shutdown:

This just goes to show you that Nancy does NOT run the country.

Socialism / Creeping Socialism
From the top article below:

"Americans may not be clamoring for socialism, but right now, Sanders has a chance of winning a major party's nomination, and in a two-party system, each major party candidate starts off with a decent chance of winning. His emergence should not be dismissed as an idle threat."

Most people talking about Bernie Sanders' viability as a Democrat candidate for the election completely miss what the real damage that is being done here.  No amount of empty promises for "free stuff" (college, healthcare, etc., etc.) is going to motivate enough people to elect Bernie as President in 2020.  The real damage, damage that is both widespread and threatening to the American way of life, is that Bernie Sanders The Socialist is giving a platform to socialism as "just another form of government" and that socialist ideas are acceptable in American society.

Censorship / Social Media Censorship
From the top article below:

"Some will argue that art follows life, and to some extent that's true.  However, life also follows art.  What's more, we all know that the left knows this. They know it with a burning passion, which is why it's so important for them to use art to undermine the institutions that they find antithetical to their Marxist positions. They undermine tradition, family, and yes, heroism."

My favorite fictional hero character is anyone played by John Wayne.  John Wayne ALWAYS played the hero in whatever movie he acted in.  But you don't have to be John Wayne, the actor, in order to be a real-life hero.  Anytime you stand up for what is right is when you, a real-life person, are being a hero.  Sure, it can be very intimidating to do so, but watching a good John Wayne movie reminds us that it is OK to do just that.  The Marxist Left HATE it when we feel bold enough to push back.

Denial / Deception / Propaganda / Social Engineering
From the top article below:

"Anyone claiming that keeping bathrooms separated by sex is discrimination is lying to you. The parents of the Manchester School District revolted against this misinformation campaign. PJ Media reached out to Gephart, who pulled four of his children out of the school and has begun homeschooling them in response to the school board's lawless actions. "We had enough of the garbage," he said. "It was toxic." Gephart didn't stop with his own children, but is leading a movement to remove 100 students from the school and cause a painful financial blow to the school's federal funding."

In the section immediately above this was a discussion about being a real-life hero.  Nate Gephart is a great example of a real-life hero… to his kids, to his community, and to America.

Political harassment: See what conservatives had to face on campus in 2019
https://www.campusreform.org/?ID=14172
Trump hater orders man to remove MAGA hat; he refuses. So Trump hater makes threat, takes swing at hat — and victim pulls out his gun.
https://www.theblaze.com/news/trump-hater-orders-man-to-remove-maga-hat-he-refuses-so-trump-hater-makes-threat-takes-swing-at-hat--and-victim-pulls-out-his-gun

Elections / Vote Integrity
From the top article below:

"This is part and parcel of that whole system-wide movement to make sure that people who are not citizens are registering [to vote] and not getting caught or prosecuted for it, and [then] switching [presidential elections to] a national popular vote system so that all those votes will help win elections."

In one sentence, that is the plan.

Miscellaneous
From the top article below: 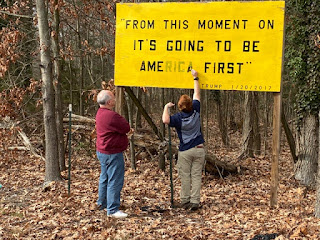